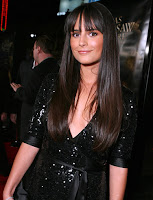 Jordana Brewster is an American actress, perhaps best known for her roles in The Fast and the Furious, The Texas Chainsaw Massacre: The Beginning, The Faculty, D.E.B.S., Annapolis, and Chuck. Brewster made her debut in daytime soap operas, with a one-time appearance on All My Children as Anita Santos, followed by a recurring role on As the World Turns as Nikki Munson from 1995 to 1998. Her first film role was in Robert Rodriguez's 1998 film, The Faculty. One of Brewster's most notable film roles to date is Mia Toretto from The Fast and the Furious (2001), which she will reprise in Fast and Furious (2009). Subsequent film work has included roles in Win a Date with Tad Hamilton! (scenes deleted), as criminal mastermind Lucy Diamond in D.E.B.S., and as Chrissie in The Texas Chainsaw Massacre: The Beginning. Her television work includes the NBC miniseries The 60's, as Sarah Weinstock, a college student and radical activist, and a pilot for a followup to the film Mr & Mrs. Smith, playing the role depicted in the film by Angelina Jolie. She is also appearing on Chuck, as the title character's former girlfriend in a multi-episode stint during the second season. In 2002, Stuff magazine named her the 96th hottest woman in their "102 Sexiest Women in the World". In 2005 Maxim magazine named her the 54th sexiest woman in the world in their annual Hot 100. In 2006 Maxim ranked her at #59 on their Hot 100. She placed 8th on afterellen.com's "100 Hottest Women" list in 2007 and 22nd in 2008.